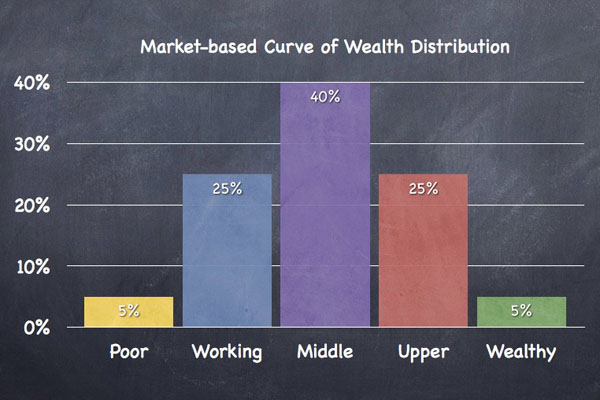 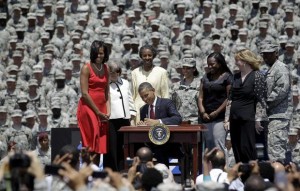 Note: On September 6, 2016 I published a companion article to this titled “Proposal for a Fair & Dynamic Market-based Economy”

We The People of the United States have come together with a defined set of six shared values: a more perfect union, justice, domestic tranquility, defense, welfare and liberty. (See Foundational Values: A More Perfect Union).

Our chosen economic system, Capitalism, must serve those values. Does it? Currently, no.

A common understanding of capitalism is that it will do exactly that if the “invisible hand” of the market is operating effectively. Given the assumption that people are created equal, in an effective market-based system, we should expect a natural distribution of wealth. Such as this:

How Are We doing?

Compare that ideal to reality. Here’s our current distribution of wealth: 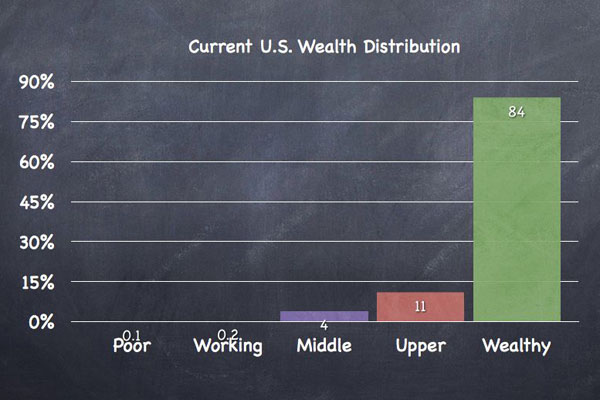 Adam Smith, referred to as the father of capitalism, argued that a market-based economy would fairly and efficiently distribute wealth. The above chart should serve notice that either his theory is wrong or that we’ve erred in implementation.

Many “free” market advocates erroneously believe that Smith advocated libertarianism, where government does little to create or regulate the economy. This does not accurately reflect Smith’s ideas. He understood that markets are themselves a function of government. Adam Gopnik of The New Yorker sums Smith this way:

“It isn’t just that a free market can survive regulation; it’s that the free market is the product of regulation, regulation designed to protect the public from the kind of arrangement that, let’s say, allows people with undue influence on the government to have a lower tax rate than people who don’t. This makes Smith a firm believer in public goods: his state has an obligation to build roads and schools, establish an army, build bridges and highways, and do all the other things necessary for a sane polity in which the market can function naturally. Everyone should pay for them, and the rich should always pay more than others. “The rich should contribute to the public expense not only in proportion to their revenue,” Smith writes, “but something more than in that proportion.”

The mantra of the Right is that our economic problems exist due to excessive regulation and taxation of the wealthy. They’ve set the Country at odds, between the so-called “Makers” and “Takers.” According to Mitt Romney & others on the Right, at least 47% of the Country are Takers, living off the productivity of the Makers.

If you have nothing, it’s hard to argue that you’ve taken something.

The top 20% control 84% of the wealth, while the bottom 60% control only 4.3%. If the Takers, as defined by the Right, were successful at taking, we’d expect them to control more than 4.3%. Right? We’re either lousy at taking or the Right are wrong.

If you have nothing, it’s hard to argue that you’ve taken something.

Perhaps the inequality found within the current distribution is due to a lack of productivity by the poor and working class? Are they just lazy? Look at this chart: 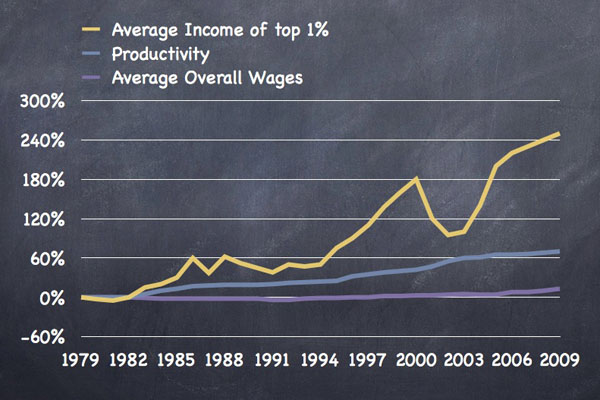 So, the workers are “making” more, and “taking” less. The real makers in our economy are the working and the middle classes, and the takers are the wealthy, who use their money to unfairly rig our economic and legislative system. Exactly what Adam Smith warned about.

Many look at the results of American Capitalism and conclude that Capitalism itself is fundamentally broken. I disagree; a properly constructed and regulated market-based economy can still be fair and efficient. Ours is a blended system of market-based economics (the liberty part of our shared values) and a strong social safety net (the general welfare part of our shared values).

A blended system is more perfect than a pure, single-theory system. Not everyone is equally capable of participating in a market system. Children, the elderly, the infirm; we must account for these members of our community. Basic social support programs increase a workers ability to be a maker.

I’m an advocate of Social Capitalism, a theory that blends the best of capitalism and socialism. Recognizing that a complex economy must account for vast differences in populations, there can be no one-size-fits-all solution.

Social capitalism: markets work best and output is maximized through sound state management of the macroeconomy. A strong social support network for the poor enhances capital output. By decreasing poverty, capital market participation is enlarged. Government regulation, and even sponsorship of markets, can lead to superior economic outcomes, as evidenced in government sponsorship of the internet or basic securities regulation. (source: wikipedia)

Define Our Values And Measure Our Outcomes

We’re busy fighting over labels such as “capitalism” and “socialism.” Those terms merely represent systems that are constructed to achieve outcomes. The outcomes matter more than the name of the system.

Our Constitution lists our shared values, which we should define in measurable ways. When we say we believe in liberty, what does that mean? What is it we intend when we list general welfare among our shared values? Are we achieving those outcomes? Does our economic system promote justice? Tranquility? Union? It should.

How Much I Feel