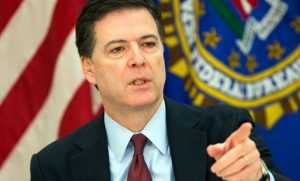 HRC treated Bernie with kid gloves the entire campaign. Did that pay off? No. He still ran a dishonest campaign (he lied) about “rigging” and “corruption.” The silver haired guy who was purported to be Mr. Pure lied his way through the primary, and we apologized for winning.
The Dems bent over backwards to appease the primary LOSER. He lost, and we gave him seats on the Democratic Platform, wherein we let nuts like Cornel West compromise the trajectory of the campaign. Did passing the most progressive platform in the history of the Country bring the Stein nuts on board? No.
It’s as though Obama apologized for nominating a Supreme Court Justice, and sat down and said nothing.
Had Comey done what he did on the watch of a Republican President, he’d be on his ass right now. But no, we’re taking the so-called higher road. Nonsense. Fire him.
I’m done playing this mea culpa game. And the Dems should be too. We are at war. We are taking shots from both the Left and the Right, and neither play fair. We need to wake up and fight.
https://moreperfect.org/site/wp-content/uploads/2016/11/nextgov-medium.jpg 284 471 Timothy https://moreperfect.org/site/wp-content/uploads/2016/09/logo-300x138.png?_t=1475293815 Timothy2016-11-19 16:46:382017-01-05 19:56:13Hey Democrats. Stop apologizing.

If She’d JUST Been a Better Candidate!
Scroll to top