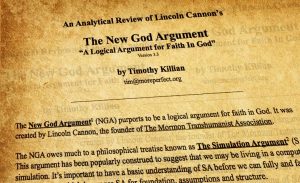 During my exit from Mormonism and for a few years after, I engaged in intensive discussion and study on the questions of God, Faith, Religion and Philosophy. One of the more influential thinkers I encountered in that journey is a man named Lincoln Cannon. Mr. Cannon remains committed to the LDS Church and Mormonism, and provided a foil by which many of my views of mormonism specifically and religion generally could be tested. He pushed me to learn and to grow.

In the ensuing years, Mr. Cannon has founded The Mormon Transhumanist Association. In that effort, Cannon seeks to find common ground between secular technologists who seek after The Singularity and his chosen faith.

Seemingly to that end, Mr. Cannon produced what he calls The New God Argument. It’s purported to be a logical argument for faith in God. The form of the argument leans heavily on The Simulation Argument by Nick Bostrom. I’ve watched this argument develop over the years, and noted as Cannon presented it in various forums, and published it in various journals.

I’ve long wanted to do an analytical review of the argument. And now I have.