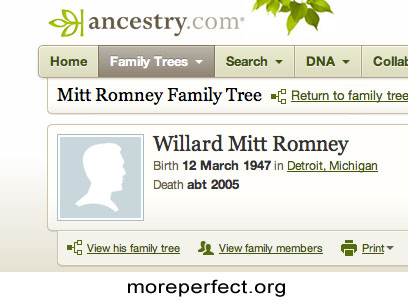 While researching Mitt Romney’s family history for a future post, I happened upon this most interesting thing today. According to Mitt’s listing at the Ancestry.com, Willard Mitt Romney died about 2005!

So, consider me a “Deather!” Mitt, I demand to see your death certificate!

Now, in line with a good conspiracy, I expect this information to be scrubbed of all evidence quickly. But, I’ve got the proof! It’s right there in my screen capture. Mitt Romney is dead!

In attempting to verify this, I went to the Mormon church owned familysearch.org. There’s no record of Willard Mitt Romney there at all! It’s all been scrubbed! So, while I’m not naive enough to present the conspiracy that Mr. Romney NEVER existed, I do wonder WHAT the LDS Church is hiding!

How To Interview Mitt Romney About Racism

How To Interview Mitt Romney About Sexism

Ask: Could a woman ever be appointed to lead your religion? Should they?

Mitt Romney is sexist. He adheres to a philosophy, Mormonism, which denies women equal rights. Mormon women are not allowed to hold leadership positions within the church and forbidden ordination into the priesthood.

Similarly, before 1978, the Mormon church did not allow black men to hold the priesthood. Had they not changed that position, Mitt Romney would have no chance to run for President; he’d rightly be branded as racist; that he’s not being asked to reconcile his sexism in a similar fashion reveals a troubling double standard.

Sexism isn’t sexy, it appears. Racism? That’s hot. Homophobia? Get a room. However, when it comes to the most dominant form of inequality, many seem complacent.

The foundational Mormon treatise “The Family, A Proclamation To The World” holds:

END_OF_DOCUMENT_TOKEN_TO_BE_REPLACED

Ask: Was the Mormon Church wrong to deny priesthood to black members before 1978?

The official policy of the LDS Church is that the racist practice was commanded by God, and not a result of racism among its leadership.

The Church has never apologized for the practice nor specifically repudiated racist teachings by LDS prophets.

Mitt Romney is skilled at evading this point, aided by general misunderstanding of the LDS Church.

He should be able to unequivocally denounce the racism of his church and of his past. He hasn’t.

During his 2008 campaign, Mitt Romney appeared on Meet The Press with Tim Russert. This specific question arose, and Russert came close to getting it right. Watch the clip:

At the end of that section, Russert asked:

“But it was wrong for your faith to [deny priesthood to blacks]?”

“I’ve told you exactly where I stand. My view is there’s no discrimination in the eyes of God and I could not have been more pleased than to see the change that occurred.”

What’s critical here is to note what Romney did not say; Russert asked “was it wrong?” Romney evaded. No apology. No repudiation of the Church or its racist practice.

Earlier in the interview, Romney states:

“I’m very proud of my faith, and of the faith of my fathers. And I certainly believe it is a faith, uh, well it’s True and I love my faith. And I’m not going to distance myself in any way from my faith.”

He will not separate his position and the position of the Church. The church has not apologized for the racist practice, nor will he.
END_OF_DOCUMENT_TOKEN_TO_BE_REPLACED