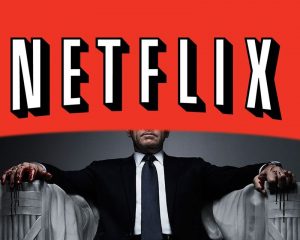 House of Cards is a dangerous and cheap exploitation of ignorance.
I’ve previously criticized journalists who mix fiction and non-fiction by using their persons to portray fictional journalists on TV.
But more than that, Netflix, its writers and producers, its executives and owners, cross a dangerous line when they mingle fiction with actual and current nonfiction issues.
For example, when they suggest that Frank Underwood is leaving to start a Foundation, to put himself where real power lies. When they mix in stories about Syria, chemical weapons, and Isis; stories which are current and which need real and nuanced understanding.
By playing loose with these real and present world issues, they are influencing the public with fantasy, not reality. It’s irresponsible, immoral.
Morality; does any care about that?
Frank Underwood at one point says “there is no justice, only conquest.” And Netflix is aiding that sentiment.
The most prescient danger we face is that people, even relatively well-informed people, can no longer distinguish between fact and fiction.
Netflix is playing that for laughs. For subscribers.
It’s deadly serious.
http://moreperfect.org/site/wp-content/uploads/2017/06/net_under.jpg 639 800 Timothy https://moreperfect.org/site/wp-content/uploads/2016/09/logo-300x138.png?_t=1475293815 Timothy2017-06-10 09:34:152017-06-10 10:22:25Netflix, not Frank Underwood, is the Real Devil