Ask: Could a woman ever be appointed to lead your religion? Should they?

Mitt Romney is sexist. He adheres to a philosophy, Mormonism, which denies women equal rights. Mormon women are not allowed to hold leadership positions within the church and forbidden ordination into the priesthood.

Similarly, before 1978, the Mormon church did not allow black men to hold the priesthood. Had they not changed that position, Mitt Romney would have no chance to run for President; he’d rightly be branded as racist; that he’s not being asked to reconcile his sexism in a similar fashion reveals a troubling double standard.

Sexism isn’t sexy, it appears. Racism? That’s hot. Homophobia? Get a room. However, when it comes to the most dominant form of inequality, many seem complacent.

The foundational Mormon treatise “The Family, A Proclamation To The World” holds:

In the Sunday School Manual for Mormon girls, there’s a lesson on Missionary work. It states:

In Mormon philosophy, men are meant for leadership, women for marriage and family duties.

Mormonism and The Equal Rights Amendment 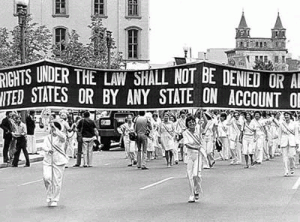 The Mormon Church has a long history of pushing its agenda into the political realm. In the 1970‘s, it was among the most vocal opponents to the Equal Rights Amendment, which states:

Equality of rights under the law shall not be denied or abridged by the United States or by any State on account of sex.

The State of Utah never ratified the amendment.

Mitt Romney holds as his highest ideal that women are not equal to men.

Before the Mormon church changed its racial policy, there was tremendous outside pressure. For example, in 1969, 14 members of the University of Wyoming football team were suspended when they sought to protest Brigham Young University’s treatment of blacks. Shortly thereafter, Stanford University decided to cease all sports scheduling with the Mormon university. Those actions began to spread, with other schools joining in solidarity.

Where’s the similar outcry over the unequal treatment of women? This year, the University of Wyoming women’s golf team will match up against the BYU Women’s Golf Team. Can you imagine them protesting the match due to sexist policies at BYU? They should. As should all schools whose athletic and academic organizations interact with BYU, male or female.

Mitt Romney is asking to be President of the United States, and just as with his position on blacks, if he can’t simply answer that sexism is unacceptable, that should disqualify him from holding the office. 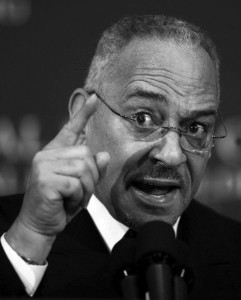 In 2008, President Barack Obama had to navigate his own obstacles relative to his personal philosophy when his longtime pastor, Jeremiah Wright, was found to have stated ideas contrary to full faith in the United States. I held then and continue to believe that it is right and appropriate for those questions to be asked of a Candidate for President of the United States.

President Obama was unequivocal in his willingness to denounce the offending remarks, stating clearly:

“I am outraged by the comments that were made and saddened by the spectacle that we saw yesterday… [Jeremiah Wright’s] comments were not only divisive and destructive, but I believe that they end up giving comfort to those who prey on hate, and I believe that they do not portray accurately the perspective of the black church. They certainly don’t portray accurately my values and beliefs. And if Reverend Wright thinks that that’s political posturing, as he put it, then he doesn’t know me very well.”

Shortly thereafter, Barack Obama resigned his membership in the church. He left no doubt where he stood.

In contrast, Mitt Romney, during the 2008 Presidential Campaign, stated:

“I’m very proud of [mormonism], and of the faith of my fathers. And I certainly believe it is a faith, uh, well it’s True and I love my faith. And I’m not going to distance myself in any way from my faith.”

The rational way to interpret his statements regarding his core philosophy is that he holds women to be unequal to men.

How will the LDS Church interpret a Mitt Romney Presidency? The answer can be plainly found at the end of the above quoted “Proclamation On The Family.”

We call upon responsible citizens and officers of government everywhere to promote those measures designed to maintain and strengthen the family as the fundamental unit of society.

In the case of Mitt Romney, that’s a very short call. Their vision of a healthy society puts men in the boardroom and women in the bedroom. It’s “Mad Men” realized in modern America, idealized in the heaven of Mormonism.

Does Mitt Romney agree with his Church and their view of women? He’s told us that he will not distance himself in any way from his core faith.

It’s time for the media to ask direct questions of Mitt Romney about his view of women.

*Update: In the October 2012 LDS General Conference, the leaders of the LDS Church announced a change in the age policy for Mormon missionaries. They lowered the age for men to 18 and the age for women t0 19, maintaining an inexplicable difference for men and women.

The Death Penalty and Human Error
Scroll to top