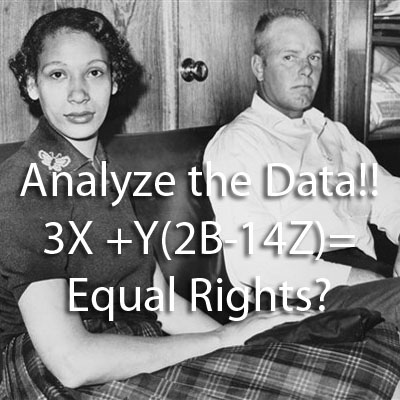 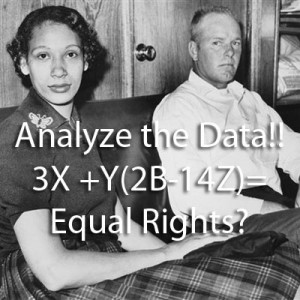 David Frum reversed his position on gay marriage. Conservatives would have you believe that the case for or against it requires a review of evidence.

In framing his reversal this way, he’s misrepresenting his previous position, and glossing over the deeper question: is conservatism capable of producing coherent policies in a nation whose foundational values include equality, justice, and union?

Conservatism has been wrong on the most fundamental questions of human rights. The questions of slavery, women’s right to vote and interracial marriage were not decided by weighing evidence, and neither is the question of gay marriage.

David Frum, a conservative columnist, recently admitted “I Was Wrong About Same-Sex Marriage.”

In linking to his article on my facebook page, I stated:

“Oops! David Frum tries to backpedal his previous opposition to gay marriage. What he doesn’t understand is that this is an indictment not just of his previous position, but of conservatism generally.”

A friend asked about my strategy of chastising a person who has come to agree with me on one of my core issues. “Why not just pat him on the back and welcome him into the tent?”

In his reversal, Mr. Frum states:

“…the case against same-sex marriage has been tested against reality. The case has not passed its test.”

Frum’s conservatism seems to suggest an evidence-based requirement of change, and yet his position is not now nor ever was informed by evidence.

In his former arguments, Mr. Frum wasn’t asking that gay marriage be tested; quite the opposite. He and most other conservatives have viciously fought any attempt to grant rights to homosexuals.

To claim now that gay marriage has been tested and found innocuous is to subtly, but importantly, misrepresent the prior position. What is more important, it’s an attempt to ignore the core problem, which is the philosophy of conservatism.

Once upon a time, I was in Frum’s wingtips: conservative and firmly opposed to gay rights. I have a visceral memory, at age 12, when my elder half-brother revealed he was gay. I felt sick, wondering how this evil came to our family. I’d been taught that homosexuality was among the darkest sins.

As strongly as I felt then (my brother was disowned by my father and I’ve not seen him since), this moment set into motion a long unraveling of my ties to conservatism. Ten years later, when another brother emerged from the closet, I was in a better position to ask the foundational question: was my philosophy broken?

At first, I concluded that conservatism was sound, but was in error on this single issue. With time, I found that answer unsatisfying.

Conservative ideology has been wrong on the most fundamental questions of human rights: slavery, women’s suffrage, civil rights, and gay rights. These errors are not discreet outliers in an otherwise sound philosophy; rather, they are direct evidence of the fundamental flaw of conservatism.

There’s no measure by which supporting slavery, denying the right of women to vote, disenfranchising black citizens or ridiculing homosexuals should lead a rational observer to conclude that conservatism has proven itself a worthy captain of democratic values.

Scottish philosopher David Hume advanced the idea that reliance on the past as a predictor of the future is a shaky foundation; a house built on sand.

Conservatism places value on past knowledge, emphasizing culture, history and authority (god, religion) as the source of knowledge. Conservatism suggests the status quo has been earned, and change should be resisted.

In his previous anti-gay arguments, Mr. Frum suggested the foundation of the family was weak and that allowing gay marriage would further its decline. Leaving aside the absurdity of indicting gay marriage, which didn’t exist, for the then failure of heterosexual marriage, his primary error is that he was asking for evidence for change that he didn’t require of the status quo. Gay marriage had to prove itself. Heterosexual marriage, which by his own admission was in tatters, needed no proof.

David Frum had no rational basis for his position previously; it wasn’t a question of being persuaded by data, so it’s irrational to claim that his new position is data driven. Simply put, his previous view is now so unsustainable that he must change or become irrelevant.

Marriage is one of the “basic civil rights of man,” fundamental to our very existence and survival…. To deny this fundamental freedom on so unsupportable a basis as the racial classifications embodied in these statutes, classifications so directly subversive of the principle of equality at the heart of the Fourteenth Amendment, is surely to deprive all the State’s citizens of liberty without due process of law.

The justification for gay marriage is not found in a weighing of scientific evidence. The right to choose one’s own family is a fundamental human right.

Did Conservatives suddenly change their view on interracial marriage because the data suggested that it wouldn’t trigger armageddon? Of course not, and to make an argument for that change in social policy based on the weight of data would be ridiculous.

The errors of conservatism follow necessarily from the philosophy; they are not an aberration, but a predictable outcome to an authoritarian, patriarchal based understanding of the world that requires no evidence for what is, only for what might be.

To pat Mr. Frum on the back now would be to miss an opportunity to ask him and others in the conservative movement to critically examine the utility of their philosophy. If they don’t, then they’ll continue to deny justice and equal rights to their fellow citizens, and we’ll all miss out on the opportunity to experience a more perfect union.

How To Interview Mitt Romney About Racism
Scroll to top